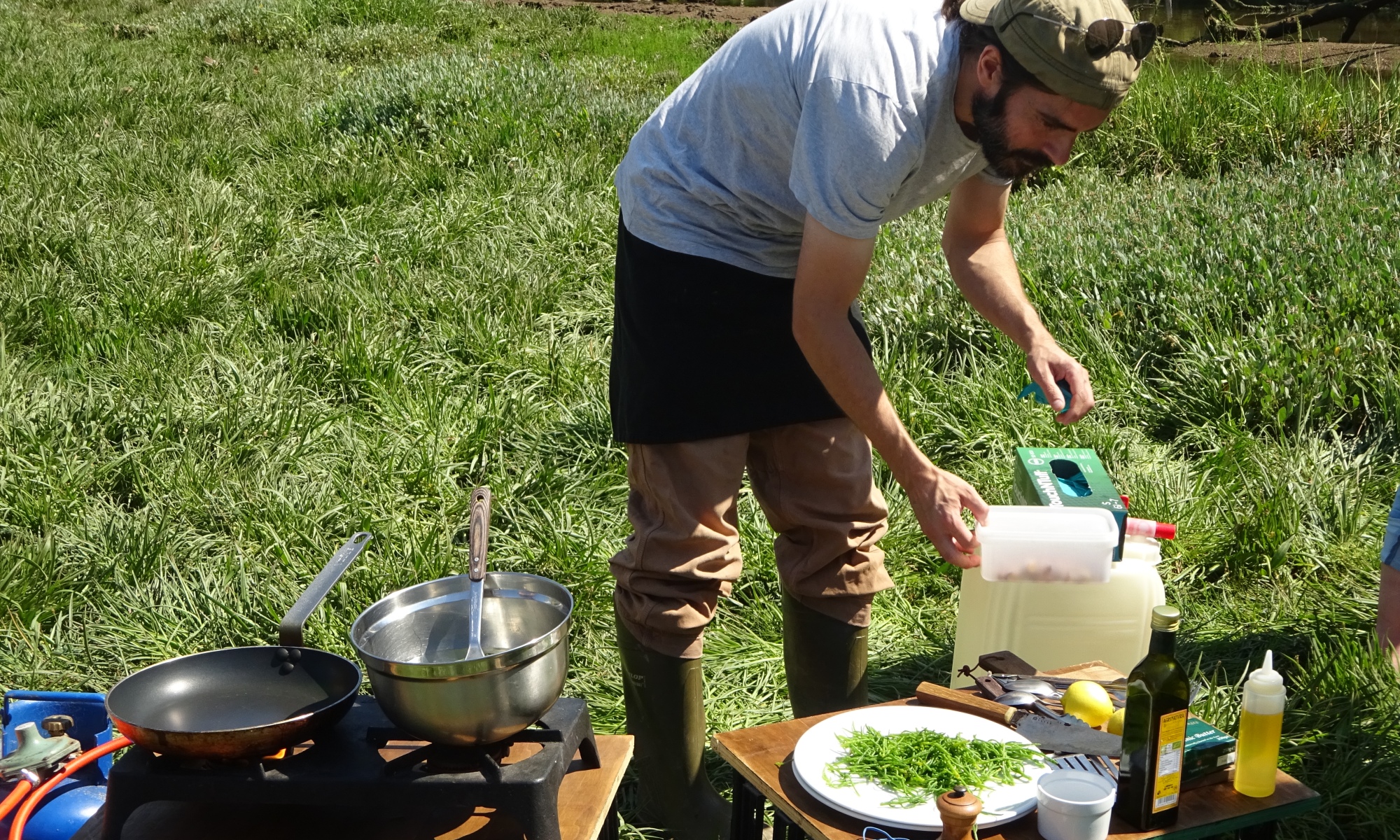 A meal with a view: marsh samphire in the Erme estuary.

Many of my most memorable meals seem to take place outside. There was the fresh squid cooked on a disposable barbeque unloaded carefully on a riverbank after kayaking out of the centre of Lincoln. Any number of lazy and extended dinners eaten in the garden at home on one of this summer’s balmy evenings, with an array of rainbow salads and crisp white wine. Or a cafetiere made with care on a teeny gas camping stove, way up in the Lake District mountains, served with a slice of French almond cake.

In my last job I was labelled early on as the weirdo who went to the park every day, regardless of the weather, resolutely determined to eat a cheese sandwich and an avocado in some semblance of fresh air.

But eating fresh samphire, picked, cooked and eaten in the middle of the Erme estuary in rural Devon, is one outdoor meal that will stay with me for many years to come.

Sploshing across the remains of a tidal river, we paused to survey the Emerald-green expanse of what looked like mini fir trees, poking out of the marsh mud.

Marsh samphire is different to rock samphire as it grows directly on the estuary bottom like grass. The season is short, only six weeks between June and July – eat it outside of that time and it is woody and tough. Growing up in Derbyshire I was familiar with neither variety, and had a vague perception of it as a posh side dish. Despite being an adventurous eater with a penchant for fish, I had never cooked with it, yet alone sourced it myself.

Handed a pair of scissors and a paper bag by Guy Watson, founder of Riverford Organic which began selling foraged samphire in its organic veg boxes this year, we began snipping away at the glossy clumps of samphire at our feet. It was strangely therapeutic, and we soon had a satisfyingly heavy bundle of green saltiness.

A pause in proceedings as Guy happened to mention there was a “very good swimming spot” on the other side of the estuary, looking somewhat surprised when we took him up on it. It’s fair to say that swimming underwear-clad in an estuary is up there with one of the more random turns a press trip has taken.

Appetites up and spirits high, we schlepped back through the mud to the ‘kitchen’ where it was time for fat wedges of crispy-skinned hake, served on a bed of steaming samphire.

Aside from the local sourcing and the joy of foraging for dinner (an ideal summer activity with children, perhaps?), eating samphire has other perks. Nutrients include a range of vitamins, it has a high level of calcium, as well as unique compounds called fucoidans often found in sea vegetables, which can have anti-inflammatory and antioxidant effects. It has barely any fat content, and as a high source of fibre it can aid digestion.

Then there’s the sustainable bit. Eating things like seaweed is becoming increasingly common as a naturally-growing food source. The health benefits of a ‘rainbow plate’ are well documented – the more colour on your plate from a range of vegetables, the more likely you are to eat enough vitamins, minerals and other important nutrients. But diversity in diets is also a good thing to get into to reduce our reliance on a small range of foods, and allow food systems to become more varied and more resilient.

When you think of eating seasonal food, the things that spring to mind are typically the first English strawberries, the autumn apple crop, or maybe homegrown new potatoes. But by the seaside, eating seasonally can have an altogether more salty taste. And as for eating food that you picked, only metres from where you picked it, what’s not to love?